Peach Creek Elementary School students in Lauren Grey's class can now understand why the American colonists rebelled and ultimately revolted! The fifth graders were learning about some of the causes of the American Revolution, such as taxation from Britain. Each student was given a cup of candy which imitated their income.  But, before students could enjoy their earnings/candy, King Grey collected taxes.

“Man, the students did not like that”, said Ms. Grey. “They were especially frustrated when they realized that the king and tax collectors were not being taxed, which led to an army of upset students declaring, ‘That's not fair’! They could understand why the colonists rebelled and wanted to revolt!”

Fifth-grader Daniel LeCaur exclaimed, “This means war!" as parliament tax collectors took more candy from his cup for taxes. Once the students realized that the king and tax collectors ended up with the majority of candy in their cups and knowing they simply had no say in the matter, they fully understood the statement "no taxation without representation."

This was a dynamic and engaging lesson for teaching students about taxation through the various tax acts the king issued on the colonists, and how it led to the rebellion of the Boston Tea Party and ultimately the American Revolution. 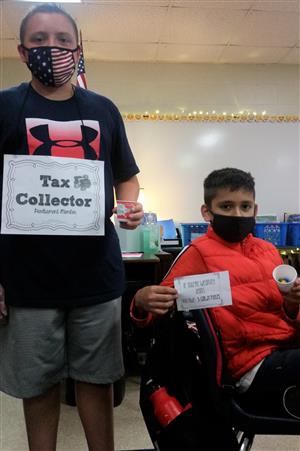